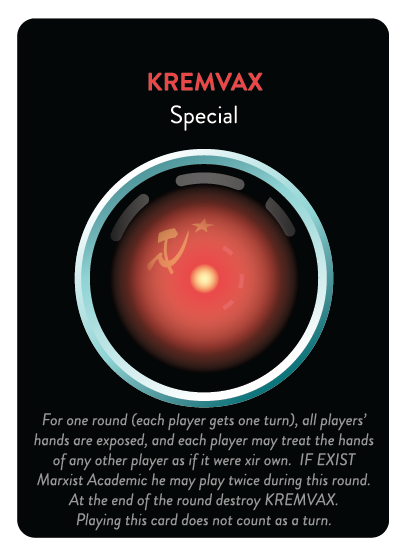 For one round (each player gets one turn), all players’ hands are exposed, and each player may treat the hands of any other player as if it were xir own.  IF EXIST Marxist Academic he may play twice during this round.  At the end of the round destroy KREMVAX.

Cards and superpowers that grant additional turns (e.g. Voice of the Voiceless, Gaslighting) are not allowed during this phase.

KREMVAX refers to the then famous (but now mostly forgotten) April Fools’ prank perpetrated on Usenet on April 1st 1984 by internet pioneer Piet Beertema.  The Soviet Union at that time was believed to not have access to Western server technology (much less a presence on the internet) and their seeming sudden appearance at the height of the Cold War was… alarming.  This was a mere year after the release of the film War Games, and tensions (at least in the US) were high.

The name KREMVAX follows server naming conventions popular at the time (short for KREMlin VAX) as does the other server addresses in the fictitious bang path MCVAX, KGBVAX and MOSKVAX.

The entire usenet message is very funny and can be found here in its entirety.