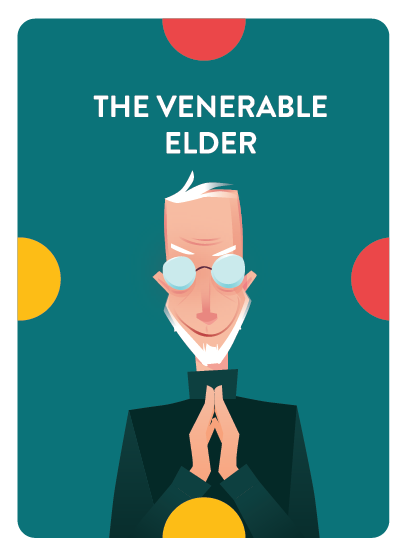 Whenever either the Summer of Love or Flower Power plot cards are in play the Elder is impervious to microaggressions.

The Elder is not permitted to attack any other player personally until his coalition point total reaches eight. (Attacks refer to microagressions, walk away, you didn’t build that or triggered! Any other card is allowed.)

As soon as his point total reaches eight the Elder flips over his character card to reveal his final form. This transformation instantly causes every other player to lose one follower from xir coalition. Affected cards are at the discretion of their respective owners.

After his transformation the Elder may attack other players normally.

This change lasts until the end of the game, even if the Elder’s follower point total again drops below eight.

Note this transformation comes at a cost. When assuming boomer form the Elder’s bottommost yellow alignment changes to red. If you had anything connected there those followers are now orphaned.