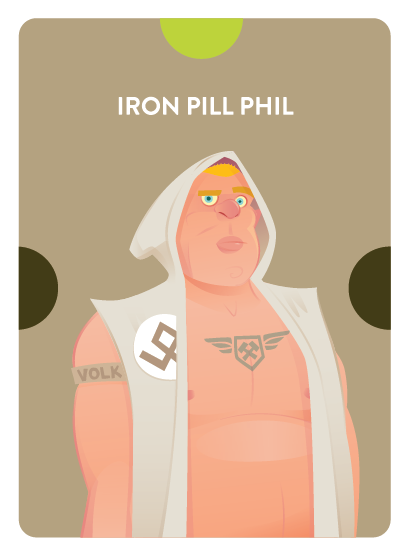 Iron Pill Phil may deploy 1-toxicity raiders directly from his hand (no need to play them to the Spawning Pool first.)

Iron Pill Phil has an automatic +2 toxicity against all SJW players who currently identify as female.

Iron Pill is a character from the Greenpill series of webcomics from 4chan’s /x/ and /pol/ subforums.  This is his actual costume: sleeveless grey hoodie, nordic rune patch, and “Volk” armband.

Iron Pill is one of a small number of “pill” characters that is portrayed positively in Greenpill.  He loves his Volk, loves Evropa, eats healthy, and works out.

His chest tattoo is a stylized version of the logo for the Neofolk band Arditi.