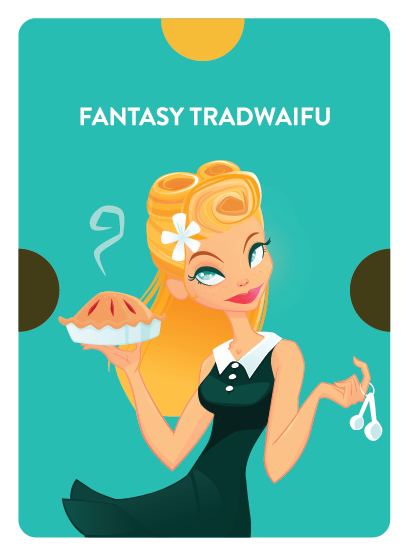 Superpower: Outstanding in her field.

Once per game the Tradwaifu may gaslight a male SJW character for free.  This action counts as a turn.

The Fantasy Tradwaifu is a recurring theme in some communities of thirsty right-wing males.  She is an idealized female (trad girl) that Men of the West are duty bound to “defend”: always white, always blond, often standing in a wheat field.  (This meme, incidentally, was originally started by us.)

Waifu (Japanese for “wife” ワイフ) is an Engrish term used by Japanese men to refer either to their real-world wife or to their favorite anime character.  In places such as 4chan it has become a shorthand for one’s imaginary (usually animated) girlfriend.

The joke here is that the tradgirl archetype is mostly fantasy and not actually real.