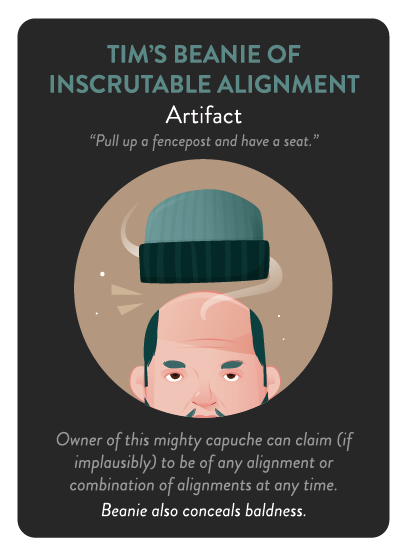 “Pull up a fencepost and have a seat.”

Owner of this mighty capuche can claim (if implausibly) to be of any alignment or combination of alignments at any time.

This refers to once-liberal-now-semi-conservative journalist Tim Pool and his ubiquitous blue-gray beanie hat.  While Tim seems to be improving over time, he is notorious for refusing to take a side—any side—on any issue.  He is also spear bald and seems to be very self-conscious about it.

The creation of this card was prompted by Pool’s announcement of his own card game identical to this one.  AFTER he had already been sent several copies.  We at Incel Riot are very thin-skinned and rude caricatures are our only defense.